Hey, everybody! How have you all been?

Some days ago I was at the Full Indie Meetup, here in Vancouver, and I met a nice guy (that I can’t recall his name, sorry), young game developer, and we started talking about sound in games – after he asked me what was my role in the game dev business.

Surprisingly – although it should not be anymore – he told me that sound was one of the last things he thought about when doing his game, after the development was in a super advanced stage. My first reaction was: “But why!?!?”. Then I said to him that, as an audio artist, I would recommend him having a sound person helping him from the very early stages of the process, mainly because we usually have a different way of approaching and creating assets and narratives, and that can help to bring new design ideas and solutions.

Then, I remembered about a text I read a while ago – Constructing Narratives through Sound Design – to try to give him examples on how sound affects the creation of a story. The text has some good insights, and although is focused on movies, the same logic can be used when we talk about games.

There is a common myth that all sound-work should be relegated to post-production, but this is a mistake which leaves the auditory aspects of your film tailing behind all other production elements …

For example, recording and designing custom sound effects can help shaping a game’s aesthetic as much as a good illustrator/artist. On the article, Arthur Lance uses the film Gravity as an example: “the sound team for “Gravity” recorded underwater guitars to create their metal-on-metal sounds for space”. As for games, we have many different examples on how sound design and music can shape the player’s experience: Limbo, Journey, Braid, Dead Space, Metal Gear Solid V…

On this Gamasutra article, “Creating Audio That Matters” (by Caleb Bridge), Martin Stig Andersen (sound design for Limbo) and J. White (sound designer for Dead Space 2) talk a lot about this matter, and have some super interesting insights.

Many can think back to sections of Limbo where they were struck by a certain feeling or sense for what the boy was doing in that place. But one thing Limbo never allowed the player to do was fully understand what was happening. Andersen achieved this by intentionally distorting the sounds of objects in an attempt to make the player think more about what’s going on and how they’re meant to react. This gave it a level of ambiguity that allows the player to “be there and make their own interpretation.”

“The more identity the sounds had, the more I would distort them,” Andersen said. “So I wouldn’t include sounds that gave too strong associations. If we added something that had a strong identity like a voice or an animal, then it would almost destroy the atmosphere. So with that style, Limbo offered an audio and visual atmosphere that can really get into the player’s mind, and make them feel scared, worried or on edge.”

“A fundamental thing that people cannot help but respond to is the sound of the human voice and, even more specifically, the sound of human suffering. It’s just an unavoidable, deep reaction that people have. So one of the elements that we’ll use as part of our soundscapes are the sounds of people in misery. It may be deeply buried, but the human ear and human mind are so attuned to human vocalizations that they’ll respond to it even if it’s just a sub-audible aspect of the overall sound design.”- J. White, about Dead Space 2 sound design

I remember playing Limbo and thinking “wow, the sound of this game tells me so much more about its universe than the visuals of it”. No question why it’s considered an amazing sounding game. The Dead Space series I’ve never played, but now is surely on my list. 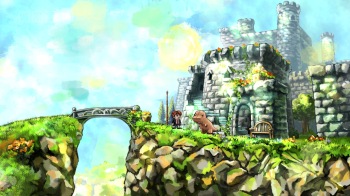 Braid is another great example on how a game can be changed by its sound. For this article I wrote last year, I researched about its great soundtrack and discovered that it was not composed for the game – it’s licensed. In fact, this actually changed the game’s artistic creation:

“It certainly set a tone,” said David Hellman, the artist behind Braid’s visuals. “When the game was early and the graphics were rudimentary, the music was certainly one of those things that made a strong impression as far as the atmosphere of each world. I think his musical choices were very good. I always felt they were interesting and well chosen.”

So, what we, as sound designers, can do to change this scenario? Well, first of all, let me say that this has been changing already – the big studios and many medium sized ones already have this in mind. But we surely do need to educate a lot of the smaller sized studios and indie developers. And this comes talking about it, showing what you can do (or could have done) for their game in the early development stages, and bringing examples of how we have already helped artists and developers creating the aesthetics of many games.

Because, in the end, we know that many gamers and devs think that games are mainly a visual art, but we do know that it’s not. We all have great examples on how sound changed a gameplay, or made us love/hate a game.